Now, I am not sure where to start. Should I talk first about the Annie’s Kids fundraiser that brought in nearly  $40,000 with over 200 guests?  Or should I talk about the explosion of Muddy’s Buddies numbers, such that now there are 27 Buddies who have been hooked up with teams and clubs?

Well, the Annie’s Kids party just happened on March 16 and so lem’me tell you how crazy that was.  Ann K. Reddington was the coolest woman and she died unexpectedly and tragically a year and a half ago. She was all about all kids and she also had a slew of her own kids. Well, her own kids wanted to do something for all kids in her memory.

So, Meg Reddington, one of those kids, hooked up with the MB team and wanted to raise some cash for the Buddies and their families. She brought together some serious talent, like Mike Calabrese who started that swanky place, Good Luck, the restaurant near Village Gate that everybody goes to.  And Jenny Ralph and Amy Ryan, too. They all know how to throw a fantastic party.

So, Mike C. and his Good Luck staff passed the most delish of appetizers and made drinks at the bar. I did not know what to do first—there were some sweet frostys on the tap, but also there were freaky good libations, (if you know what I mean). The apps were good, but there just wasn’t enuf time to get to ‘em all.

Over 200 people showed up, and then they had some auctions of stuff like: dinner for eight at Black and Blue. ?!?!  Mike C. and his crew also offered dinner for eight at his place, too. Then, Rick Reddington, who is, like, the King of Napa Valley was giving away dinner for like twelve.  I am not sure who won those dinners, but I want each of you to know, that I am available… whenever. You can call me or text me any time.

All together they raised about $40, 000 for the Muddy’s Buddies.

That dinero will go to the Buddies and their families. Now, there are 27 Buddies who have been connected with high school and college teams and clubs. Not only are the there teams like Aquinas  Football ( I hear they’re pretty good), teams from Victor, Byron Bergen, Brighton, and Churchville-Chili, but there are also dance clubs from U of R and Nazareth, and, even, the Art Club at Allendale-Columbia. The great Muddy himself would be proud ‘cuz he used to teach and coach at Allendale-Columbia , and he thought doing anything athletic, artistic, or otherwise, was cool for cats.

Stephen Lawrence, (we are not supposed to call him “Chopper”) who started the MB project,  said he and Meg R. and Mike C. all were in first grade together. I’m not sure what that means exactly, but I would want any one of them on my side in a fight.

Meg was impressive and inspiring when she spoke about her mom. She said she remembered her mom when old friends smiled or when people said “aren’t we having the best time?” I remember Annie K. as the mother every body wished for.

Chopper, er… Stephen,  was also inspiring when he talked about how MB had helped 27 Buddies, but also had helped 27 communities grow up and “support, befriend, and love one of their own”  Chop said that idea brought tears to his eyes and made his hair stand on end. Well, I might have had tears in my eyes, but if my hair was standing on end, well,  that’s because I  wanted it to do that. (ya know what I’m sayin’?)

And don’t forget the MB Lax Festival is coming up fast. We’re looking at two Sundays again, May 4 and May 18. 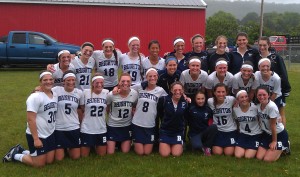